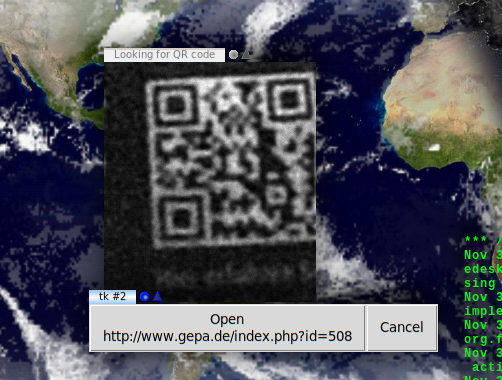 qropen.py in action: Here, it has scanned a QR code on a chocolate wrapper and asks for confirmation that you actually want to open the URI contained (of course, it doesn't come with the glitzy background).

When I was investigating the SARS-2 vaccination certificates last year (sorry: that post is in German), I played a bit with QR codes. A cheap by-product of this was a little Python program scanning QR codes (and other symbologies). I cannot say I am a huge fan of these things – I'd take short-ish URIs without cat-on-the-keyboard strings like “?id=508“ instead any day –, but sometimes I get curious, and then this thing comes in handy given that my telephone cannot deal with QR codes.

Yesterday, I have put that little one-file script, qropen.py, on codeberg, complemented by a readme that points to the various ways you could hack the code. I'll gratefully accept merge requests, perhaps regarding a useful CLI for selecting cameras – you see, with an external camera, something like this thing starts being actually useful, as when I used it to cobble together a vaccination certificate checker in such a setup. Or perhaps doing something smart with EAN codes parsed (so far, they just end up on stdout)?

On that last point, I will admit that with the camera on my Thinkpad X240, most product EAN codes do not scan well. The underlying reason has been the biggest challenge with this program even for QR codes: Laptop cameras generally have a wide field of view with a fixed focus.

The wide field of view means that you have to bring the barcodes pretty close to the camera in order to have the features be something like three pixels wide (which is what zbar is most fond of). At that small distance, the fixed focus means that the object is severely out of focus and hence the edges are so blurry that zbar again does not like them.

Qropen.py tries to mitigate that by unsharp masking and potentially steep gammas. But when the lines are very thin to begin with – as with EAN stripes –, that does not really help. Which means that the QR codes, perhaps somewhat surprisingly given their higher information content, in general work a lot better for qropen.py than to the simple and ancient EAN codes.

There clearly is a moral to this part of the story. I'm just not sure which (beyond the triviality that EANs were invented for lasers rather than cameras).